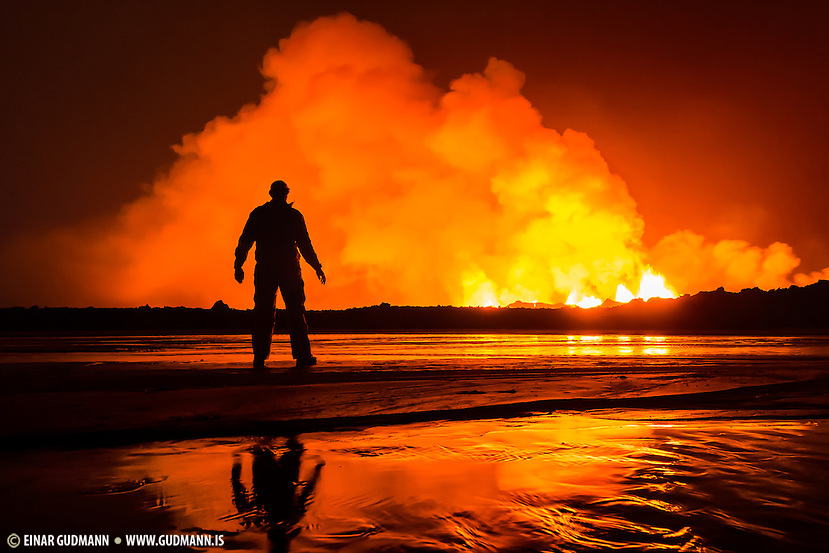 Now I have gone twice by plane and last Thursday few friends  of mine and I went by an old Land Rover from Akureyri to the eruption site in Holuhraun (tourists call the site Bardarbunga which is wrong – Bardarbunga will possibly erupt, but probably not as politely as the eruption we have at the moment). This was a long and difficult trip where we drove for six hours to get to Drekagil which is a location mostly used by tourists going to Askja which is closed for traffic since the eruption began.

On the way we met few guys on a jeep leaving the eruption site. Their eyes were read and they shook their head at us constantly trying to get sand out of  the eyes. The sandstorm had taken it´s toll on them on the ground even though they had been using masks and glasses. When we came to Drekagil the sandstorm was visible in the distance threatening to treat us the same way as the other photographers leaving. Steam from the eruption in the distance going up to the polluted sky was too promising for us to be negative.

The road is mostly rocks and sand. When we came to the end of the road at the site the storm was calming down. Few minutes later there was only a gentle breeze. Worries about the sandstorm were out of the picture, but now we had to keep our eyes open for gas and sniff for strange gassy smells.

As a photographer the senses were stimulated to the extreme.  It was difficult to concentrate on finding foregrounds and taking photos with the possibility of dangerous gas in the darkness around the site. The wind could change anytime.  Beeing there was awesome. It was tempting to start using the camera from the first few seconds, but breathing in the experience was a must.

The contrast in the photos is unusual. This was like taking photos of a small sun in complete darkness. You had complete darkness and incredible brightness in the same photo. Bracketing was possible but one or two stops did not do much. I used mostly the 500 mm/f4, 14-24 mm f/2.8, 24-70 mm f/2.8 and 180 mm f/2.8. The auto-iso on my Nikon D4s was useful but once my brain kicked in I switched to manual.

Driving from the main craters and to the end of the lava stream from them took around 30 minutes.  The lava has reached 13 miles from the craters. We did not feel well going so close to the stream from the lava going into the Jökulsá river, but keeping the mind on the wind I never felt unsafe.

Driving back home was probably the most difficult part of the trip. We came back home at six in the morning after 18 hours of driving and photographing. Tired, but we were a bunch of happy photographers. This is what we love to do.