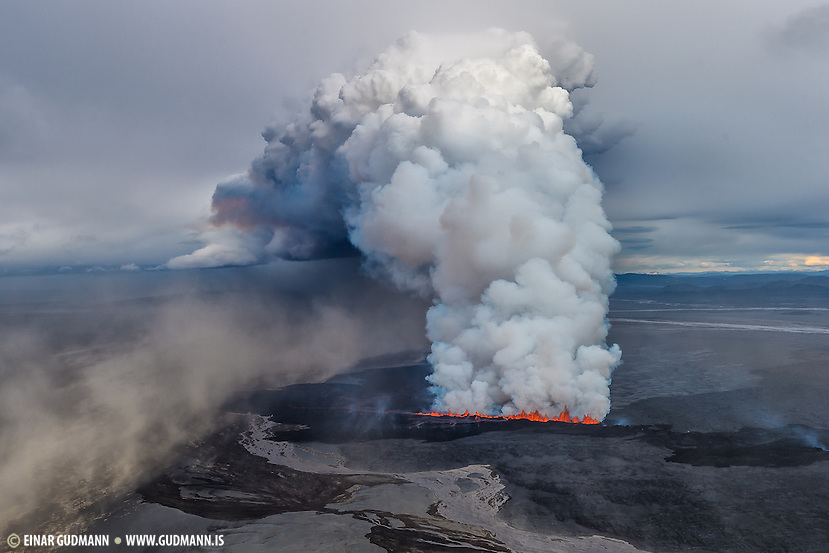 I had only seen cellphone photos of the eruption on second of September when me and my wife Gyda Henningsdottir flew over the eruption site in Holuhraun. I had contacted a pilot who was ready when the call came. The weather had been bad which explained why there had been no photos of the eruption so far. We were excited when we took off in a small Piper Warrior II plane from the airport in our hometown Akureyri. The weather was still not good, but we had a green light to fly. The plan was to go airborne and see if we would have visibility to fly.

From the very first few seconds there was turbulence. The small plane jumped up and down. Dark skies and rain clouds on the horizon did not promise much visibility, but after 45 minute flight when we got close to the site the sight in front of us was magnificent. The smoke from the eruption was hundreds of feet in the air and on the south side of the eruption the sun gave us dramatic light. Over Vatnajokull glacier the sun was shining.

Sandstorm on the ground added even more drama to the photos. Sometimes the eruption lava disappeared in the sandstorm. We spent almost an hour flying in the area. Took few dives and sharp turns sending the stomach down to the toes. Holding my Nikon D4s going at full frame rate I knew that I had not seen anything comparable to what I was seeing in the viewfinder. I was happy with the photos and even though airsickness was threatening to spoil the trip, it was worth it. When we got home and I started to work on the photos my heart was pounding in my chest like as if I was running. I knew this was special and would get attention.

In the following two days after publishing the photos on www.gudmann.is the response to the photos was unbelievable. Hundreds of emails, photographers  from all over the world calling, the media wanted photos and visitors to my website was around 300.000 in only two days. The response was probably this strong since we were the first to publish quality photos.

Go to the gallery