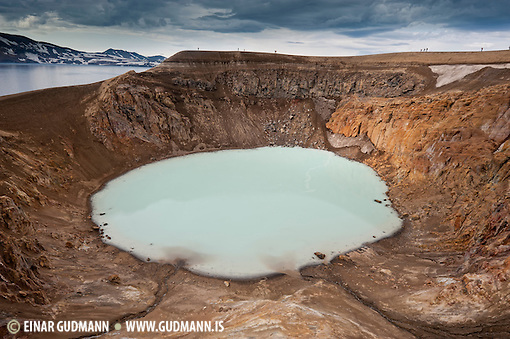 We arrived in Drekagil late evening after a long drive on a road which is actually not much of a road. After a good nights sleep we woke up early to start walking. Even in July it took us a 4,5 km walk in snow to get to the Askja area in the central highlands of Iceland. This summer the snow was taking longer than usually to melt. The snow was heavy, wet and difficult to walk in. The weather was cloudy but the sun appeared once in a while which made the contrast in the landscape great.  Shortly after we arrived at Víti dozens of tourists and photographers arrived.

In Icelandic Askja means box or caldera. Askja is actually a stratovolcano surrounded by the Dyngjufjöll mountains which rise 1,510 m.  The area is only accessible few months a year and is almost as remote as remote can get in Iceland. The astronauts of the Appollo program used the area for preparation for lunar missions and it´s easy to imagine that this is how landscape on the moon looks like – except the snow.

Lake Öskjuvatn (Lake ash) and the crater Víti (Hell) are very popular tourist locations for a good reason. The landscape is spectacular and for some reason this is a location which reminds us how small we are.  Öskjuvatn lake is close to Víti and is the second deepest lake in Iceland at 220 m deep.

On the fun side it is possible to swim in the water of the Víti crater if you don´t mind the volcano smell. The water is around 8 m deep and is between 20°C-60°C. Tourist often swim in Víti and since there are no dressing–cabins one should not be surprised to see naked people swimming.  One should though be careful. Swimming in the crater can be dangerous because carbon dioxide can accumulate on top of the water on calm days causing you to pass out. Not much fun in that.

Most of the photos in the gallery from Askja are taken with the Nikon 14-24 lens and the SW-150 filter holder and softgrad. It takes effort to get to remote locations like Askja. Besides capturing few good photos there, experiencing this lunar landscape is worth the heavy steps in the snow and mud.